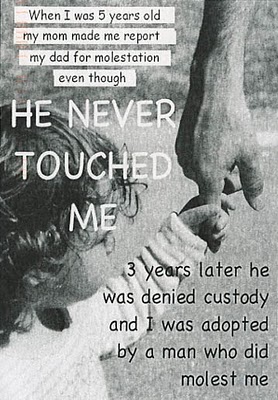 It seems to have become almost de rigueur for many of my clients both men and women who claim to be victims of parental alienation to have had some allegation made against them of a sexual or violent nature.

A common experience reported by victims of parental alienation (Alienated Parents) is that they are often barred from the former family home and prevented from having any contact with their children without ever been charged with an offence of this nature yet alone convicted.

Indeed, it appears that many Alienated Parents find themselves effectively found guilty of an alleged offence by virtue of the implicit acceptance of children’s statements particularly in family assessments conducted by family consultants appointed by the court.

These family assessments do not necessarily make determinations as to whether events have taken place or not-that is not within their terms of reference. Yet, children’s assertions made against a target parent are often accepted as being implicitly true and I have seen very little forensic questioning in family reports as to the basis of their claims, especially noting that few of these claims are ever referred to the police for investigation.

Yet time and time again allegations made against the target parents are not investigated but target parents are presumed guilty and must defend themselves at the same time as maintaining what is already becoming a tenuous relationship with their children. This type of legal abuse is a typical strategy used by Alienating Parents of both genders.

It must be a wilderness of mirrors for practitioners. The issue of false allegations is controversial. Family law has been accused in the past of  ” needing training” and “privileging contact over safety”. On one hand safety of the children is a paramount consideration in Australian family law. However on the other hand it is well known that children do make false allegations and they make such allegations in a totally believable and plausible manner that is suggestive of the independent thinker phenomena (Baker. Amy.J). Indeed, are the Family Violence Best Practice Principles enough and how do practitioners, family consultants accurately discriminate between true and false reports of abuse when they are on the front line between conflicting and irreconcilably opposed accounts from each parent?

My colleague Dr. Stephen Herman has researched how authorities and practitioners respond to unsubstantiated or uncorroborated allegations of child sexual abuse and how surprisingly easy it is to make errors of procedure and reasoning that then undermine the process of assessment, ultimately risking a child being exposed to potential sex offenders or an innocent protective parent removed from a child’s life. If you are responding to these complex questions where the stakes are so high then you might be interested in a series of workshops conducted around Australia by my colleague Dr. Steven Herman through the Australian Psychological Society (APS) on “Responding to Allegations of Child Sexual Abuse: Implications of Psychological Science for Legal Professionals”

You might be surprised and shocked just how easy it is to get this complex assessment process both right and wrong. Remember, the stakes are high; a child sex offender goes free, a protective parent is falsely tainted and removed from a child’s life, a child loses a loving parent, a valid claim of sexual abuse is ignored and so on.